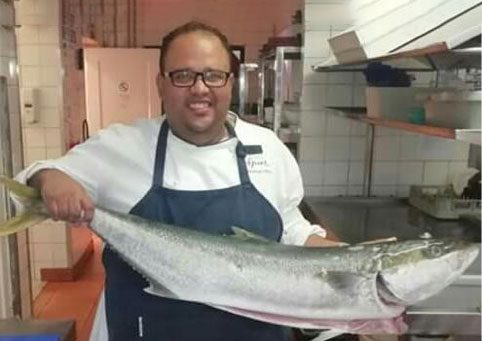 Nathan started working as a trainee chef in the pastry kitchen at The Cape Sun, Strand Street Cape Town in the year 2000.

In 2002 he worked for the former Brenton-on-Sea in Knysna as the Chef de partie, specialising in the hot section of the kitchen.

A further 18 months saw him working at the former Wakame Asian Restaurant, specialising in Asian and Seafood Cuisine, in the hot section again.

He then worked for The Stellenbosch Hotel (now known as Stellenbosch Kitchen), as a sous chef for 1 year, specialising in a bistro style of cooking.

He moved onto “Camissa” at The Table Bay Hotel and worked with Jocelyn Myers-Adams (critically acclaimed international chef), seeing further growth and experience. He worked there for 3 years.

He started working at Spier- Kitchen Eight on 04 November 2016 as a Junior Sous Chef.

However, on 10 February 2018, a day after his parents’ wedding anniversary, tragedy struck. Nathan was involved in a head-on car collision, with a minor behind the wheel of the other car, shortly after completing his shift at Spier. Having almost lost his life has made Nathan appreciate life even more. “Remain humble. Faith and belief also play a key role in everyday life. When you get a second chance grab it and make use of its full potential.” He continues to live with daily pain.

On a lighter note, Nathan says: “I wonder if food loves me as much as I love it.”

He was transferred to Spier’s Conferencing and Banqueting as a Kitchen Administrator on 01 July 2019 so that he could spend less time on his feet. However, Nathan continues to bring his part, overseeing the kitchen and dealing with a larger number of patrons.

Nathan originally wanted to be an electrical engineer but changed his mind in his matric year and decided to become a chef. “I saw a similarity in these two industries because they were always evolving, new ideas and trends, however food never becomes obsolete. There will always be a need for people to eat.”

He is enthusiastic about food. He is dedicated, passionate and strives to create the highest quality dishes whilst trying to elevate himself to the next level.

“My favourite vegetable? It’s hard to single out one as they are the most universal and influential food group, but if it came down to the wire it would have to be broccoli because of its versatility to be an accompaniment or the star of the dish. I am always experimenting with seasonal produce”. The change in seasons provide different fresh produce to play with and this allows Nathan to create dishes that capture the flavours of each season. “Treat food with passion and respect and you will reap the best results of what you produce.”

Nathan loves listening to music of different genres and enjoys the outdoor life with his children. He is a Manchester United and Protea supporter.

I would personally like to mention that Nathan is a loving, spirited individual, who always treats one with kindness. A gentleman indeed.

Nathan was kind enough to share this recipe with us:

Melt butter and saute onion. Add sweet potato and sugar and allow to caramelize. Add cinnamon, lemon grass and coconut milk and simmer till cooked. Remove cinnamon and lemon grass and blend until smooth. Season to taste with salt and pepper. Serve with toasted sourdough  bread and fresh coriander. Serves 4-6